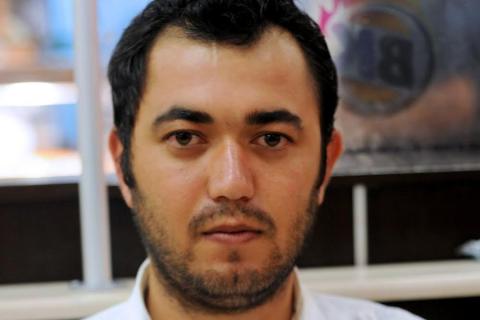 CEU alumnus who spent almost 3 years behind bars due to trumped-up charges appeared on the pardon list signed by the President of Azerbaijan today (March 17, 2016)

Rashadat graduated from Central European University Business School in 2007. After graduation Rashadat came back to his home country Azerbaijan where almost immediately he became one of the young leaders of the movement for democracy and human rights.

Rashadat was among the founders of the N!DA Civic Movement which aimed to bring about democratic change through peaceful and non-violent methods.

Rashadat Akhundov was arrested on March 30 2013 and charged with preparation for a crime, and group possession of arms and explosives.

At the end of their trial the N!DA activists, led by Akhundov, made a powerful speech that became known as “Live Not by Lies”:

“If there is any sign of a tendency for violence, solely the government is responsible for it. As the government creates unlawful conditions, people become more aggressive and want revenge. Of course, it encourages a bias towards violence. Being a civic movement, we did our best to prevent physical confrontation and propagate nonviolent struggle. We used numerous examples from global experience that prove that nonviolent struggle is far better than violence. Ironically however, we were accused of violence.”

About the reason of their arrest:

“We are arrested for and proud of demanding freedom, rule of law, and human rights for the nation we belong to, for the land we are residents of.”

The CEU community has been following the case closely - throughout 2015 and 2016 students were updated on the situation with Rashadat and other CEU alumnus Ilgar Mammadov through publications in the Activist and the CEU Weekly. In 2016, HRSI organized the exhibition “Azerbaijan - Doubling Down on Repression” presenting stories of 10 political prisoners in Azerbaijan and a panel discussion on political prisoners of Azerbaijan with Necmin Kamilsoy, civic activist and Emin Huseynov, human rights defender. CEU students wrote more than 20 letters of support to Rashadat and Ilgar.

The CEU Human Rights Initiative sends sincere greetings to Azerbaijani civil society activists and celebrates this victory together with them. We remain committed to democracy and human rights and hope that soon our other CEU alumni, Ilgar Mammadov, as well as many more journalists, NGO activists and human rights defenders will be released in Azerbaijan.

Thank you to Nataliya Novakova for bringing the news to our attention.